Bill Drayton founded Ashoka in 1980 based on the idea that the most powerful force for good in the world is a social entrepreneur: a person driven by an innovative idea that can help correct an entrenched global problem. The world’s leading social entrepreneurs pursue system-changing solutions that permanently alter existing patterns of activity.

Everyone A Changemaker (EACH) Onitsha, South East Pre Launch

Ashoka has been in the other regions of Nigeria for a while only but is only just entering the South East hence the Pre Launch to create awareness in the city of Onitsha.

An event anchored by Ashoka’s South East Co-leader, Ozii ‘Baba’ Anieto, who after the opening remarks and prayer introduced Ashoka, in his own words, “Ashoka is an organization that looks to co-create and partner with people that are helping solve societal issues in their immediate environment”

After which the floor was thrown open for people to pick a topic they would love to see discussed, topics like Insecurity, the Economy, the 2023 General elections, and the issues of vote buying and voter apathy.

Mr. Chikezie Chiedu shared his optimism about our electoral process and how it is even more difficult for our politicians to manipulate, and that vote buying is a sign of their desperation. He urged people to make sure they participate and cast their votes because it counts.

I am because you are

In line with Ashoka’s EACH initiative, Mr. Chikezie used the Ubuntu philosophy to illustrate the role every one of us must play in building the society we want, in his words, “The chaos around us today is the feedback of our behaviors because for every action, there is an equal but opposite reaction. We should be the change we want”

Mrs. Linda Nnodiogu, a child sexual abuse advocate and a writer, talked about how she’s been using her influence to sensitize children on sexual abuse, something that started up as a need to sensitize her children to protect them against this social malady but after realizing that “no child is safe until every child and parent are sensitized, as my kids would still interact with other kids at school and home”

She’s written books, The Secret of The Claypit and Not My Child, in the bid to sensitize both parents and children, and with her foundation has gone to schools to talk to pupils about sexual abuse, especially “schools located at poverty stricken areas as the children in these areas are more susceptible to sexual abuse”

No child is safe until every child is

Oliọna, a literacy society in Onitsha that uses the art of storytelling, poetry, and spoken words to effect positive changes in its environment whilst promoting the art and craft of storytelling, was represented by talented Favour Ezeogu who performed Kyle Jenée Lacey’s White Privilege and Maya Angelou’s Still I Rise. A stunning performance, one that Angelou herself would be proud of.

Obinna Ngwubike, an On Air Personality and Sports journalist, talked about how sports can be used as a tool in effecting positive changes in our community, something he’s already doing with Sports Refined Like Fine Wine and his role in developing sports at the grassroots.

The audience was divided into two groups, each group tasked to brainstorm to proffer solutions to the problems in Onitsha and its environs, after which both groups presented these solutions through their leaders. The issue mostly raised was about the streets of Onitsha littered with dirt and what active role we could play in part with the government to keep our streets and major roads clean.

Mrs. Uchenna Ugwu highlighted the importance of Ashoka in the East and how it can raise our consciousness in contributing to the development of our societies. She also spoke about the need to support one another, do what we can remotely to improve our societies, and the need to shine our light out there for the world to see.

Ozii Anieto drew the curtain on what has been a wonderful spectacle by thanking everyone that made it to the event.

EACH Pre Launch was amazing and even promises to be better, you can not afford to miss an event like this one again. 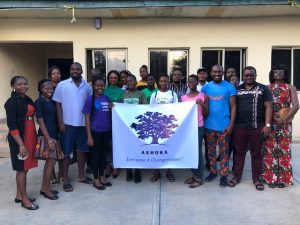 Jeriq’s Gives Back To His Community

The Lesson From Peter Obi’s Phenomenon

Bye Bye to Up Nepa?