I have searched through the internet to read up about a colossal. But there is no article or a post that captured the life of one of the greatest beings that shared this space called the earth. His times were not captured in Wikipedia, and neither did any blog nor forum wrote about the life of this Abagana industrialist. However, there is an Amazon book by Joe Asogwa titled ‘Sir Joe Nwankwu: The Man, His Business’. And the book didn’t provide a picture of this great man.

Born in 1924, Sir Joe Nwankwu was a phenomenon. He started as a teacher but resigned after 3 months to join the business world. From the scratch, he founded Olympic: a conglomerate that was one of its kind. His products from Olympic Drinks Company Limited became a fierce competition for Coca-cola all over Nigeria. He also established Olympic Packers Limited: the foremost corrugated carton industry in the East of the Niger. Olympic Packers also housed the section that produces plastic created for Olympic Drink.

At the height of his industrial prowess, he organized a solo trade exhibition/trade fair for all his products. A one-of-a-kind and audacious outing that wowed the visitors with the number of unique products under his roof.

Joe Nwankwu was a founding father of ‘The People’s Club of Nigeria.’ He was one of the pillars that rebuilt the South-Eastern region of Nigeria after the Biafra war. He was so acknowledged globally that – 4 years after the war – he addressed the business community in Washington DC, USA.

Sir Joe was madly in love with his wife, Regina. As romantic as he was, he named his most popular soda brand Gina: after his wife – a decision that kept his wife’s name on every lip.

When his wife died around the 90s, people mourned her deeply. Those that knew how Joe loved her bemoaned: ‘Only if money could raise the dead…’

Sir Joe was an unusual philanthropist and a devout Christian. He was also the biggest employer of Labour in the organized private sector at the height of his business success. 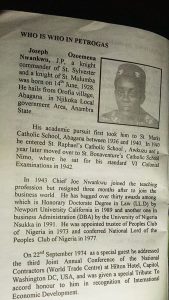